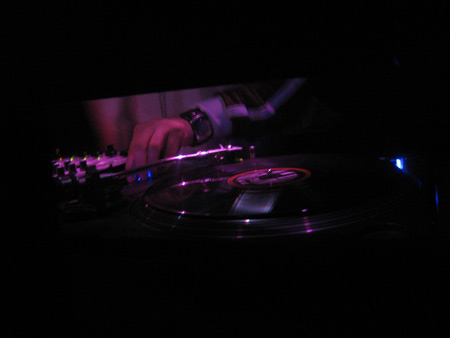 “..and now they’re making records, Spankrock for one, Amanda, Plastic Little, it all started with us just hanging out together….our whole energy of that party is now being translated into music, which is cool… it’s not just me and Diplo spinning records anymore, people are actually making music based around that energy. ”

That’s LB, talking about how the old school legendary Hollertronix parties that him and Diplo put on in Philly, have now created the next movement of club music.

Over the past 3 years, no two DJ’s have created as much hype both in the club and in internet land as Low Budget and his partner, Diplo. Mashups, blending styles – Dancehall, Dirty South, Indie Rock – it’s all happening now thanks to these two Gents.

They’re ruthless on the decks, and they’ll cut anything. When you hear the fader cross, half the fun is the surprise of what they actually manage to mix together. Check Low Bee’s newest mixtape, Snap or Die, for proof (done with his buddy DJ Deluxxx of their new crew the Trilladelphians.) The real fun though is in the energy of the crowd, and how their music makes the ladies bounce.

Toronto was no different, as Low Bee blew up Footwork on April 6th.
On the phone a little while later, we got into those early days of Hollertronix, the current state of hip hop (NY?), and getting rep off the internet.

Hot Interview. A two-parter. Go!
(And watch for this crew’s next gen, believe it or not, they’re already here.)