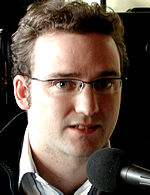 “The world has become complex and so strategic that peacekeeping is not what it once was. ”

Alexandre Trudeau was in Toronto for the University of Toronto’s Great Careers Series at the Career Centre. This was the first ever Higher Learning segment on The First Word.

Trudeau speaks with an incredible amount of passion. He’s a man of ideas, and he uses jounalism and documentary filmmaking as a means to express those ideas to the world.

You can’t help but be drawn into the philosophical way in which he lives his life. He speaks of living your life in the raw, being a risk-taker, and confronting your fears as if it’s the only way to live. And to him, it is.

In 2003, he spents months in Iraq filming “Embedded in Iraq”, a documentary on the US invasion. In 2004, he produced “The Fence” where he documented his stay with a family of Palestinians living on one side of a barrier, and then with a family of Israelis, liviing on the other side of the barrier.

He is a bold and decisive thinker, and one of Canada’s great young minds. The students that braved the cold and made the trip were lucky that day. This is an interview not to be missed!

Special thanks to Alexandre Trudeau, and Mary Giamos at the UofT Career Centre.